Steil, R-Janesville, said packing the U.S. Supreme Court could be one of many attempts by Dems to ensure they maintain political power.

“That’s what banana republics do,” Steil said. “And that bill will probably be coming forward.”

Steil also accused Dems of pushing voting bill HR1 in order to win elections. He criticized the legislation for “gutting” voter ID laws. Steil also criticized the bill’s program that would match small donations, up to $200, to participating congressional candidates at a 6-1 ratio, noting that a “crazy liberal in Madison” could donate $200 to a New York congresswoman.

“We need to be on the offensive, speaking to people about what the Democrats are trying to do to maintain their power,” Steil said, adding that Dems losing their first Senate parliamentary procedure vote on HR1 was a “win.”

Steil also spoke out against Dems’ attempts to make Washington, D.C., a state, raising concerns that two senators representing D.C. would likely be liberal. To combat these attempts, he said, Republicans need to maintain focus on winning elections.

“What we need to be doing in 2022 is focusing in on winning our elections,” Steil said. “We need to elect Republicans in the state Assembly, in the state Senate and we need to defeat Governor Evers and replace him with a conservative Republican.”

GOP activists reject resolutions calling for Wisconsin electoral votes to be rescinded, Vos to be removed as speaker 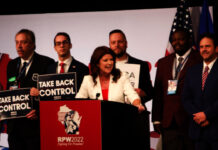