Debuting During the Republican National Convention, the Ad Is Part of A Previously Announced $2 Million Digital and TV Ad Campaign on Trump’s Failed Coronavirus Response

MILWAUKEE, WI — Today, Protect Our Care released a new digital ad highlighting President Trump’s relentless war on health care, including his lawsuit to completely dismantle the Affordable Care Act. During the Republican National Convention, Trump and his allies have been lying about his response to the coronavirus pandemic and obscuring his years-long battle against health care and the chaos it has created for Americans.

The Trump administration is arguing before the Supreme Court in the middle of a pandemic that the entire Affordable Care Act should be struck down. If successful, President Trump would rip away health care from 23 million Americans and end protections for more than 135 million people with pre-existing conditions, including for millions of Americans who have contracted the virus. 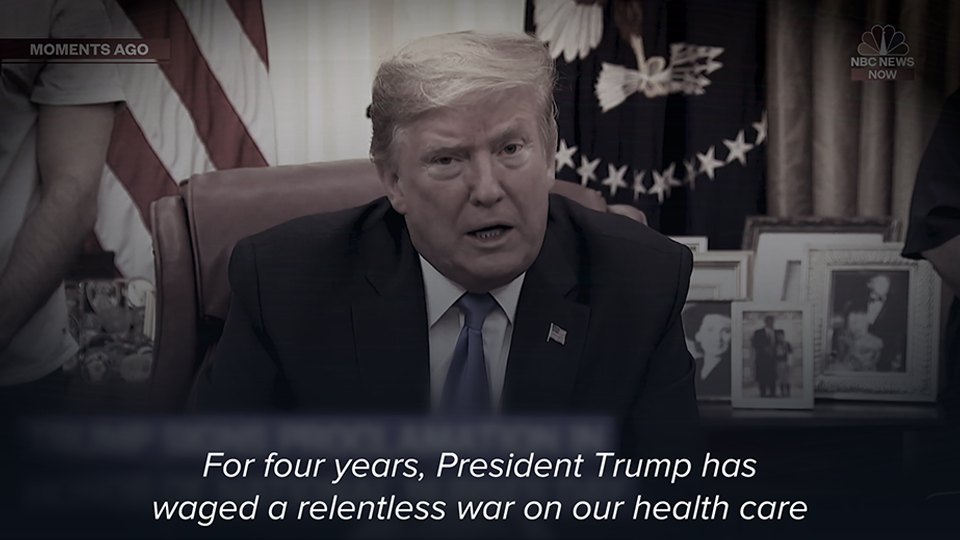 “Don’t be fooled by President Trump’s lies at the Republican National Convention. He has been waging a war on health care since he took office,” said Protect Our Care Executive Director Brad Woodhouse. “Now, in the midst of an ever worsening pandemic, Trump is going to the Supreme Court to try to dismantle the Affordable Care Act and throw our entire health care system into chaos. Voters know health care is on the ballot in November, and we need to hold Trump accountable for his health care sabotage.”

AVO: For four years, President Trump has waged a relentless war on our health care. After failing in Congress, Trump is now before the Supreme Court trying again.

TV ANCHOR(O’DONNELL): One of the jobs of the attorney general in the Justice Department is to defend the federal government’s position in litigation, but not anymore.

TV ANCHOR (MADDOW): 133 million Americans can be thrown off their coverage or denied coverage because they have a pre-existing condition of some kind.

TV ANCHOR (SCARBOROUGH): Donald Trump’s record on this is so abhorrent. Make no mistake, in 2020, health care will be the issue that determines who wins the White House.

AVO: Tell President Trump to drop his lawsuit and put the health of the American people first.