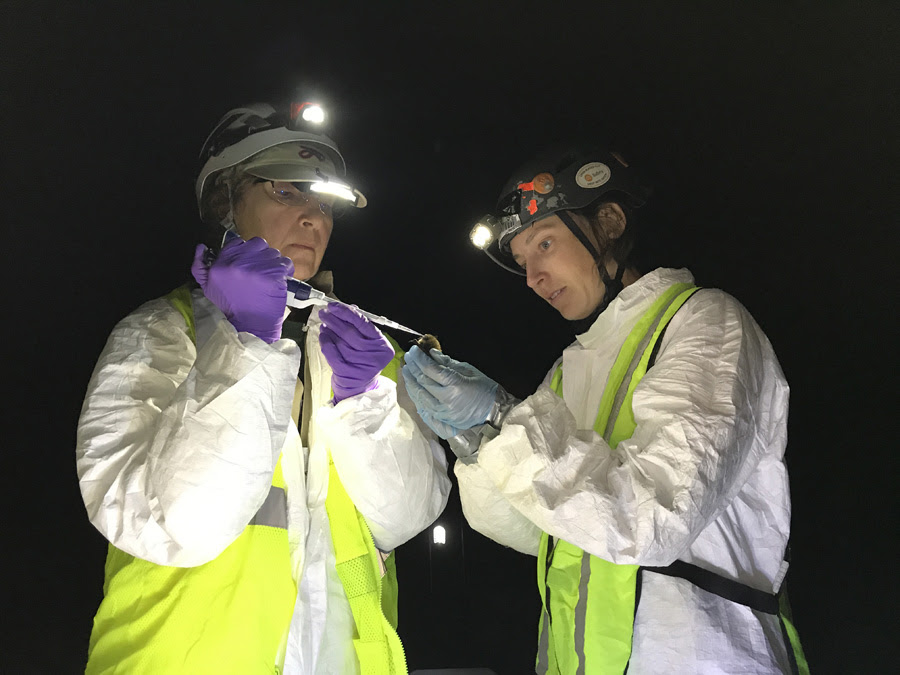 Vaccinating bats to save them from white-nose syndrome. – Photo credit: Tonie Rocke, USGS

MADISON, Wis. — The 2019 Natural Heritage Conservation Program Field Notes highlight a few of the gains for Wisconsin’s rare species and State Natural Areas this year. Some of those highlights include a banner year for endangered piping plover chicks; the first vaccinations in the wild to help Wisconsin bats survive a deadly bat disease; and more state natural areas than ever getting the help to control invasive buckthorn and garlic mustard and preserve rare prairies, savannas and barrens. 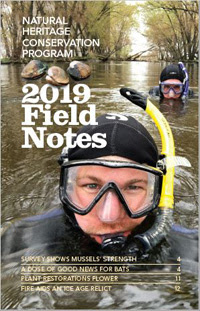 The Field Notes are featured as a photo-packed insert in the December Wisconsin Natural Resources magazine. “This time of year, we look back at our successes and challenges and share them with the people who are working hard to conserve Wisconsin’s natural heritage,” said Drew Feldkirchner, director of the Department of Natural Resources Natural Heritage Conservation Program.

“Our 2019 Field Notes just scratch the surface of our conservation successes together. It is one way we thank people for taking part, whether they are partners, volunteers, donors through their Wisconsin income tax form or purchase of an Endangered Resources license plate,” he said. “These contributions are all very important to help protect and restore the diverse plants, animals and landscapes we want to pass on to future generations.

Wisconsin is home to an array of magnificent natural resources. Native plants, animals, picturesque forests and wetlands are part of what makes the Badger State so great. Sadly, more than 400 fish and wildlife species are in big trouble – with some populations so low that many are at risk of extinction.

The Bureau of Natural Heritage Conservation at the Wisconsin Department of Natural Resources is working hard to jump start wildlife comebacks on the ground, in the air and water for generations to come. We sat down with DNR Conservation Biologists Rori Paloski and Jesse Weinzinger to learn more about how they are bringing back the natural habitat for two at-risk species in Wisconsin in the Wild Wisconsin – Off The Record podcast titled “Saving Wisconsin’s Special Species.”

For more on how we’re saving at-risk species together, dive into the 2019 Field Notes report online or in the winter issue of Wisconsin Natural Resources Magazine hitting mailboxes soon!

New this year in NHC’s partnership with the magazine to produce Field Notes is expanded coverage of the extinction crisis unfolding globally. An article titled “Preventive measures: with nature in peril on many fronts, proactive conservation may help ward off extinctions [PDF],” explores worldwide and U.S. research documenting rising extinction rates and tells the story of a species extinction underway in Wisconsin.

The legislation would redirect $1.3 billion of dedicated funding annually to states to implement their required Wildlife Action Plans to identify species and their habitats with the greatest conservation need. Another $97 million annually would be directed to Tribal Nations for conservation.

Current congressional funding is unpredictable and renewed annually at only a fraction of that amount, about $61 million.

“Passing the Recovering America’s Wildlife Act would be a game-changer for Wisconsin wildlife,” Feldkirchner said. “We could accelerate proactive conservation with our partners and citizens to keep any more species from becoming threatened or endangered.”

Field Notes and “Preventive Measures,” along with a colorful Friends of Wisconsin State Parks calendar and stories including the strategies wildlife use to beat winter, are available in the December Natural Resources magazine. Subscribe or give a gift of the magazine through February to receive the issue.