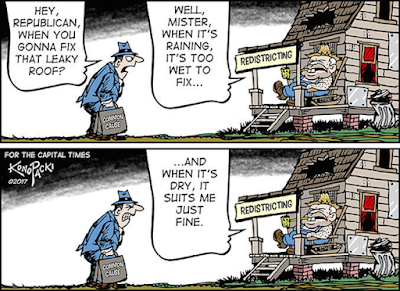 The battle for fair voting maps and for ending partisan gerrymandering received a big boost in Tuesday’s election. Voters in La Crosse and Vernon counties showed their support for non-partisan drawing of legislative boundaries in the state based on Iowa’s non-partisan redistricting process. Both counties had advisory referendum questions on the ballot Tuesday.

Wisconsin citizens will have their first opportunity in more than a decade to testify in support of fair voting maps and against partisan gerrymandering of state legislative and congressional districts at “sanctioned” state legislative public hearings scheduled by the Joint Finance Committee during the month of April around Wisconsin.

Gov. Tony Evers included non-partisan redistricting reform in his state budget at the urging of CC/WI and other reformers. Your voice is needed to ensure that it is not pulled out of the budget by guardians of the corrupt status quo – of which there are many in the Wisconsin Legislature, but not in the public at large.

Try to get to one of these public hearings and make your voices heard! The 16 legislators comprising the budget-writing Joint Finance Committee are supposed to be in attendance at these public hearings, and the media will cover them as well. So this is the best opportunity yet to bring wider public attention and support to ending one of the most partisan gerrymandering of legislative and congressional districts of any state in the nation.

The Co-Chairs of the Joint Finance Committee may decide to limit testimony to two or three minutes. They haven’t announced that yet. Written comments can be emailed to the Committee at [email protected]

For more background information from CC/WI about this issue to educate you and to help you prepare your comments to the Joint Finance Committee, see this January communication and press release.

For much more information about this issue, please browse our website.

Finally, if you have not already done so, please sign our petition to the Wisconsin Legislature in support of the Iowa model redistricting reform legislation that is now in the state budget. We are 85 percent of the way toward our goal of 5,000 signatures so please help us get to the finish line!

And, as always, be sure to email or call Jay Heck if you have any questions or require further information.