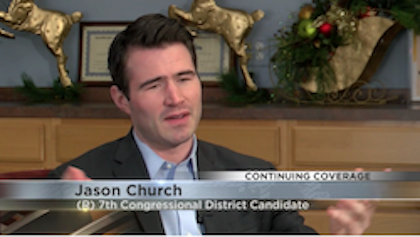 Click here to watch the interview
(Hudson, WI) – Last night Jason Church voiced his support of President Trump following his impeachment in the House of Representatives on WAOW. Mr. Church, an early supporter of the President, discussed his desire to fight for Trump in Congress amidst the partisan impeachment proceedings.

“It’s tough to see obviously with everything that’s going on to not have representation here in northern Wisconsin. I’d love to be fighting there right now,” said Jason Church.

Mr. Church placed responsibility for impeachment on the Democrats, saying “They’re doing everything they can to try to remove him through this sham impeachment proceeding.”

Like President Trump, Jason Church is an outsider who is ready to fight against the radical left and work for the people of Northern Wisconsin.