STURGEON BAY, Wis. – The public is invited to help celebrate the 50th anniversary of the establishment of Whitefish Dunes State Park on Friday, July 14.

Whitefish Dunes State Park protects the fragile dune environment on the eastern Door County Peninsula. The park preserves the largest and most significant Great Lakes dunes in Wisconsin. Whitefish Dunes is a day-use park; there is no camping.

The 50th Anniversary Celebration at the park will be from 11 a.m. to 2 p.m. and includes music, food, a short program, artists, cake and music provided by the band Last Man Standing. Events will take place under a tent in the second parking lot, rain or shine. The annual Candlelight Hike along the Beach will be held from 7:30-9:30 p.m. on Saturday, August 19. A daily or annual park sticker is required.

Interest in preserving the area where the park now exists dates back to the 1930s when it was identified in a study of locations for additional state parks. Renowned landscape architect and conservationist Jens Jensen recommended Whitefish Dunes as a park site in 1937. A joint study between the Wisconsin Conservation Department, predecessor to the Wisconsin Department of Natural Resources, and the State Planning Board in 1944 recommended the location become a state park.

In 1959 the National Park Service cited this area as one of the outstanding scenic areas on the Great Lakes, adding further emphasis to the significance of the area and recommending it as a state park site.

In 1961, the Wisconsin Legislature enacted a long-range program of acquisition and improvement of state recreational facilities known as the Outdoor Resources Action Program or ORAP. The program was funded by a one-cent tax per pack of cigarettes that prompted a wave of new park purchases, maintenance projects and the era of rails-to-trails developments.

In a review of potential sites for using ORAP funds to purchase park property, the Wisconsin Legislature specifically named and identified the Whitefish Dunes area as one of the highest priority areas because of the quality of the beaches on Lake Michigan and because it contains some of the highest sand dunes in the state. A dune known as “Old Baldy,” is the tallest dune in the park and rises 93 feet above lake level. 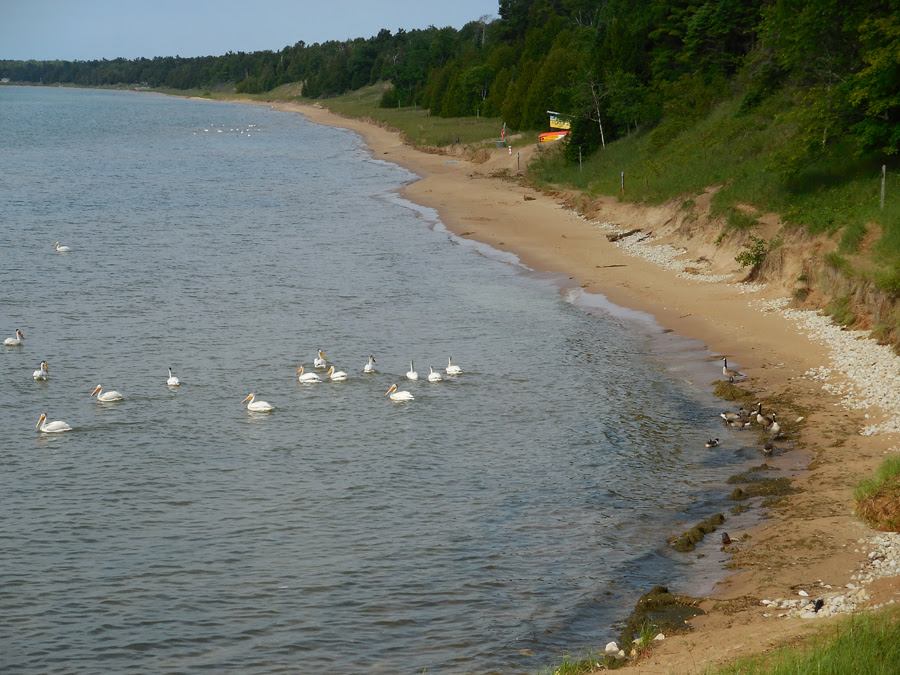 High Lake Michigan water levels have reduced the available beach at Whitefish Dunes State Park this summer, but the water has still been popular with pelicans and geese.
Photo Credit: DNR

In 1982, 230 acres of the 867-acre park were designated as a state natural area. The park contains several rare plants including dune goldenrod, dune thistle and dwarf lake iris. Evidence of eight separate occupations ranging in age from 100 B.C. to the late 1800s have been found in the park. After European settlement the area became home to a fish camp and saw considerable commercial fishing and trading activity. There are six shipwrecks in Whitefish Bay.

Whitefish Dunes State Park has 14.5 miles of hiking trails, a picnic area and a reservable shelter. Swimming has long been popular at the park’s sandy beaches, but currently high Lake Michigan water levels have reduced the available beach area at the park this summer. The park’s nature center features year-round programs, exhibits and displays on ecology, geology and human history.

For more information on the park, search the DNR website for keywords “Whitefish Dunes.”